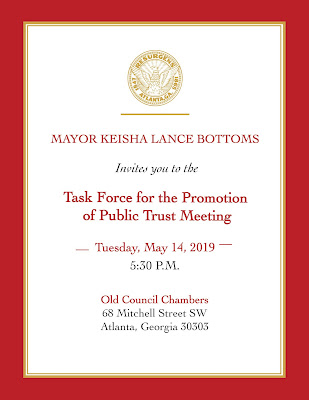 At 5:30 pm, the Mayor invites citizens to attend the Task Force for the Promotion of Public Trust.
This will be held at the Old Council Chambers at City Hall, on the Mitchell Street side (68 Mitchell). According the the AJC,

The Task Force for the Promotion of Public Trust will discuss its responsibilities and goals, as well as the city’s ethics, transparency, and compliance structures.

After that, 6:30 pm at Zoo Atlanta, the City of Atlanta’s Office of Design will be holding its Annual Awards Program. This program includes a Community Design Award, and this year's award for NPU-S is for the Crystal Sykes / Cahaba Drive Trail. 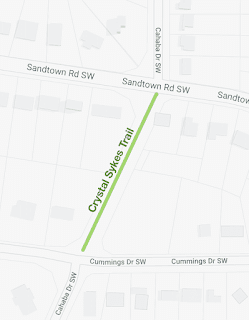 This small trail runs from the intersection of Cahaba and Sandtown to the intersection of Cahaba and Cummings, one block long. It was formerly an unpaved section of Cahaba surrounded by decaying properties. Thanks to neighborhood activism, the road was blocked off, but requests to have it paved were fruitless until, tragically, 11 year old Crystal Sykes died from an accident riding her bicycle along the rutted dirt pathway. This spurred the creation of the trail, maintained to this day by the Westridge-Sandtown Neighborhood Association.

Members of the community will be honored tonight for their work on this project.